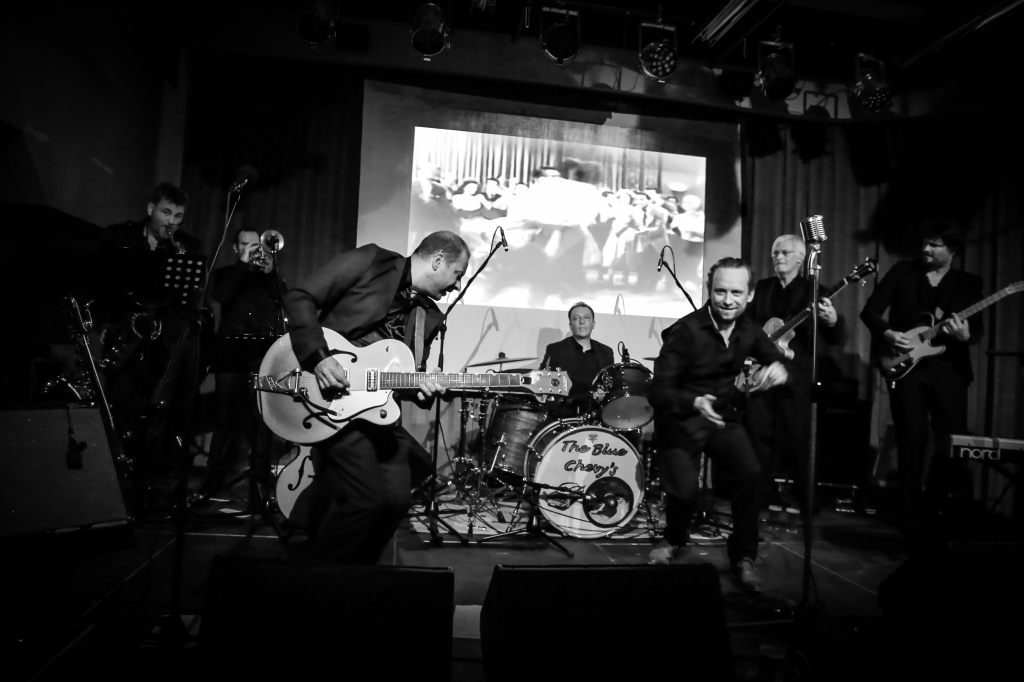 A band that has crossed many rivers to bring you roots music that stirs your soul.

The magic recipe behind The Blue Chevys remains a secret, but it deserves credit that they have been able to keep their band together for more than 30 years. Besides the friendship, it’s without doubt based on their willingness and desire to keep evolving by combining Rhythm & Blues, Rock & Roll and Americana.  Their new album “ The Night Calls” , released by Naked Productions on 18th of March 2022 ,  is a perfect example of this. A beautiful eclectic mix which reflects perfectly how they successfully intertwine different roots styles with only one purpose and that is too stir your soul.

1989: at a local high-school in Haacht, Belgium – about 20 miles north-east of Brussels – brothers Frederic & Philippe Martello team up with Kris Bries to kick-start The Blue Chevy’s. As reflected in the name of the band, it shows their initial fondness for vintage rock & roll and neo-rockabilly. Whilst other members join and leave, it’s clear that the sound and direction of the band is defined by the Martello-Bries trio. They quickly get some local recognition from local venues and start building up their live repertoire.

Having the opportunity to play at the recognized Swing Blues Festival (BE), they get inspired by the Texas Shuffle and Jump blues as they share the stage with The Fabulous Thunderbirds, Paul Lamb and Mike Morgan. A change of direction, as they start to integrate these styles in their existing R&R set. It proves to be a successful cocktail as they get booked for nearly every festival or venue in Belgium and the Netherlands in the following years.

In 2003, they have the opportunity to work with Filip Casteels, recognized guitar player of the band El Fish. Under his wings, The Blue Chevys releases its first album “Motel Birdcage”. The raw enthusiasm and fresh sound on that album is well-received and leads to some impressing appearances at the largest Blues festivals in Belgium and the Netherlands.

In the following years, the sound matures and the band starts working on a successor for the first album. Joined by Jan Ursi on piano and Hammond, a more rich melodic sound is developed that results in more contemporary rootsmusic with influences of Americana. They are able to convince Teddy Morgan (USA) to join them in Belgium to record their next album ‘Moving On” in 2007. As the result is further away from Rock & Roll, they decide to change the band’s name into Poplawsky. A daring choice, but it allowed them to address a wider audience without losing touch with their loyal fans. Proved by the selection for the talent contest organized by “Humo” – one of the major magazines in Belgium – and opening as support act for Canned Heat.

The Poplawsky-era ended in 2012 as the desire of the band to return to its roots became a certainty. Jan Ursi, who left the band a couple of years earlier, rejoined on R&R piano and the original name was restored. The band enforced itself further with Jean-Luc Cremens (bass) and Sven Smekens (rhythm guitar), taking care of the groove, and by adding an additional dimension, bringing in Kim Van De Weyer on trumpet and Koen De Sloovere on saxophone.

The EP album “Turn it Back”, released in 2015, brought it all together and relaunched the band with some memorable concerts at Breda Jazz Festival (NL), Luxembourg Jazz Rally (Lux) and a selection for the Belgium Blues Challenge finals.

In 2019, The Blue Chevys is celebrating its 30 years anniversary and the band is touring to support the release of a compilation album ‘Twice Fifteen”, that clearly proves the band’s evolution throughout the years. Thanks to some live concert broadcasts on Belgium national radio Classic21 and Nancy WebTV in France, the fan-base grows throughout Belgium and France.

However, this is not where the story ends. The Blue Chevys continue to evolve and is working on its next album, that will explore further the different paths that roots music has to offer. “The Night Calls” album will be released in March 2022 on the well-known Naked roots-label. First single ‘Willow Tree” out on 15th October 2021.